Waves Around an Island

It is a curious fact that when waves approach a shore that slopes into the water, they do so parallel to the shore line. Consider, for example, a circular tropical island with beaches all the way around, and with a prevailing westerly wind that generates trains of crests heading eastwards. If you observe the waves on the lee (east) side of the island you will see them running up onto the shore, opposite to their original direction.

To understand why this happens, one must first be aware that as a wave travels across the surface of a body of water, the water particles beneath it move in orbits: circles in deep water, flattened ellipses in shallow water. The orbits decrease in size exponentially from the surface downwards, so if the water is deep enough the particle motions die off quickly enough so that the wave doesn't "feel" the sea bottom, and is therefore unaffected by it. In shallow water, however, the wave does interact with the bottom. That's why the particle orbits flatten. Intuitively, as a wave passes from deep water to shallow water, we expect the bottom to apply a "drag" on the wave, slowing it down. Indeed, this is so, and both direct measurements and mathematical theories of wave mechanics show that the wave speed (celerity) in shallow water is proportional to the square root of the water depth.

How does this explain waves moving "backwards up a beach"? As a wave crest approaches a circular island that has uniformly sloping shores, the part of it that enters shallow water first begins to slow down while the rest of it continues. As more parts of the crest progressively slow down, the crest line curves towards the shore and eventually lines up parallel to it. This happens all the way around the island, as shown in the figure below. Note that the crest lines bending around opposite sides of the island eventually cross, so if conditions are right you should be able to see crests passing through each other at right angles. 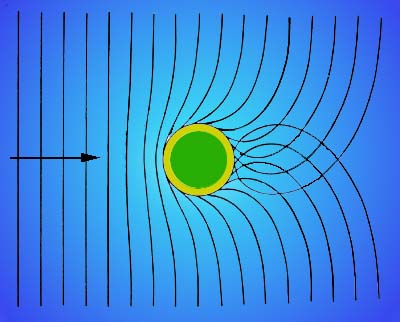